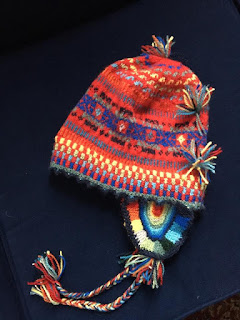 ... to start thinking about the 2019 Annisquam Sewing Circle Christmas Fair!

At least as far as Grace Murray is concerned. Grace has created another beautiful hat to be auctioned off at the Fair the first Saturday in December.

Each hat is a work of art designed and knit by Grace who has been a member of the Annisquam Sewing Circle since 1954. This is hat number three hundred and fifty three for Grace.

Grace was inspired by a book she bought while on a yarn buying trip to Halcyon Yarn in Bath, Maine, Andean Folk Knitting by Cynthia LeCount Samake, published in 1990.

The following summer while moored in the fog along the coast of Maine with her husband, Dave, on their boat, Ladybug, she had Dave read the complicated instructions for the edging that starts every hat. In the following years Dave devised several tools to make her job easier. Dave designed several motifs for special hats including a design of the the Schooner Thomas E. Lannon for Tom Ellis.
Posted by Annisquam Sewing Circle at 1:16 PM